When you were punk, what exactly did you do? Were you rebellious towards your parents? Did you think everyone/everything was shit?

I still *am* a punk!!!
Being a punk can include being polite to senior citizens,
being on time to meetings, wearing party dresses and singing along to Taylor Swift if you so choose.

When I was a teenage punk, I was horribly unkind to my parents, and I was rude to society at large.
Now that I am an adult punk, I realize that my limited ability to empathize as a teen was a big problem.
Because no person, including  my parents (as imperfect as they were), or the random person on the street (who may look like a "conformist") deserves rude treatment.
Even from someone with a mohawk!
There's something elitist or arrogant about thinking you have it So figured out that everyone else deserves to suffer. They may not have had access to the same ideals, or they may just not agree with you, but they're still human people who were once children and who are just trying to do their best.


I agree with the rage that goes along with punk. When the scales drop from your eyes and you see what is really going on around you, with societal  norms & power structures, it makes complete sense to start screaming and thrashing and slam dancing! BUT I also admire or idolize a kind of punk that takes that rage and constructs something out of it, instead of just tearing the world down. The thing you construct could be so cool that people identify with and find shelter in it. Who knows, maybe your contribution will change society as a whole for the (punk) better.


People I recommend you (as a young punk) look up, or look up to :
Ian Mackaye from Minor Threat, Fugazi & Dischord Records,
and Kathleen Hannah, whom you can watch all about in the movie "The Punk Singer" (by Sister Spitter Sini Anderson) , which is streaming on Netflix RIGHT THIS INSTANT.
They are people who felt the same teenage punk rage you do, and built something out of it that changed the world.
I know it changed mine, for the better!

Take Care, dear Enid.
You are not alone!


p.s. You asked what I did as a teenager. Besides being a rude dude and playing pranks on society with my best friend Aly, I did these things:
-Traveled to political rallies and tribunals
-Joined & ran Food Not Bombs in Kansas City
-Made a zine that I sold and traded at punk shows
-Interviewed bands for my zine, with varied success (got yelled at by the singer of The Scofflaws for asking inane questions like "What's your favorite kind of cheese?")
- Had leopard printed shaved-head hair
-Threw rocks at some children who called me "A Ugly Boy" for having a shaved head
-Ran a friend's hardcore punk VHS distro out of my bedroom for a summer
-Started a "Girl Positive" discussion group (where we watched homo-erotic videos and talked personal politics)
-Watched Matlock
-Went Vegan
- Ate a lot of veggie-chili fries at Ottos Malt Shop.
-Organized a zine conference in KC*
-Was on a panel at said zine fest with Jello Biafra, who was a dismissive jerk
-Organized a "Rock the Vote: Rock the Nation" youth forum for kids who weren't old enough to vote but wanted social change.*
-Drove around all night with my friends who did a zine called "Sleep Is The Enemy"
-Met Ian Mackage, who was exceedingly patient to these same friends as they interviewed him about the value of sleeping vs not sleeping.
-Stopped shaving my arm pits
-Tried out not wearing a bra, which was a mistake given my particular chest situation
- Had a short-lived band called "The Yikes's" who sang songs about guys I worked with at Subway
-Ran a zine distro called The Pippilotta Delicatessa
-Traveled to shows and hardcore punk festivals
-Drove really far, alone, to see the band Avail
-Got into a horrible car accident, after-which I broke my veganism to eat a package of Milano cookies.
-Made vegan burritos for traveling bands
- Wore a cow suit (from PETA) with my friend Aly to protest the National Cattleman's Beef Association.
- Went on a cross-country activist tour to protest primate experimentation
- Picked up Henry Rollins from the airport* (this is in there for no good reason, has nothing to do with what I did as a human being, I just wanted to tell you that strange fact).

*These organizing activities were only possible with the support of genuinely engaged and interested adults in the Kansas City Area, particular Ann Winter and Culture Under Fire, an anti-censorship non-profit and festival.

p.p.s. Be warned: not all punks share the same ideals! There are plenty of misogynist, alcoholic, shit-head punks out there. They may be wearing the same cultural markers of punk, but they can exhibit the same frat-boy posturing that you find in your own high school!*
I went to plenty of punk shows as a teenager (or even into my 20s) where gross dudes threw their beer on me, shoved their way to the front, and basically took up as much or more aggro, homophobic and woman-hating space as the people who I hid from as a teen in Kansas. All while having crusty-punk dreadlocks and butt-flaps!
Keep your eyes open, and take care of yourself! If something is making you uncomfortable at a show, leave! (I guess you could speak up, but if people are having an idol-worship mob mentality around a band of shit-heads, you might be wasting your breath.) Leave unsafe spaces, go listen to a Bikini Kill record in your room, and try again at a different show. Find a different scene! They're out there, even if you can't see them readily from your town. You could create that space!  Even if it's just you and one friend moshing in your basement, or watching "Suburbia" in your Mom's den, it's better than letting your heart get knocked around in a cool-looking sub-culture.

*Riot Grrl was created in response to this behavior, but it still exists and thrives in different places!
The mainstream culture of oppression being handed down to it's scrappy-looking heirs.

Serving Up Hard Advice About Your Partner's Self Esteem

Hello!
I have a new bit of advice up on Bitch Magazine for you to read.

Enjoy!
In the meantime, here is my unsolicited advice of the day:
If you are feeling blue, give someone a gift (without expectations of a response), get outside with the dog, read a chapter of a book about something bigger than you, and watch your favorite t.v. show. It may not chase the blues away entirely, but at least you will be spending your time well instead of digging around in the dumps (or on the internet).

Posted by Ask Nicole at 8:24 PM No comments:

New Advice Comic Up at Bitch! 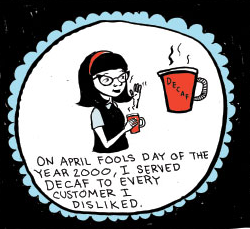 I have a new post up at Bitch Magazine's website. It is a comic about how to combat sexism at your service job.

Posted by Ask Nicole at 4:41 PM No comments:

Good afternoon, ladies and gentlemen,
I have big news for you:

I am going to be doing advice for Bitch Media, purveyors of Bitch Magazine!!!
HERE is the link.

And here below is their blog post about it. Check it out and send in questions, specifying they're for me (or go ahead and choose one of the other licensed advice professionals).

Let's face it: All of us need a little help sometimes.
That's why we launched a feminist advice column, Ms. Opinionated, back in October 2012. Writer Megan Carpentier served as Ms. Opinionated advice columnist for a year, penning thoughtful answers to questions like "Should people getting married consider how much it will cost their friends to attend the wedding?" (answer: yes) and "What should I do about my friend's 'personal brand' being a slur?" (answer: Listen to this They Might Be Giants song).
Now, we're relaunching Ms. Opinionated with three great new columnists. You can send in a question on any topic and one of these three smart folks will field it. 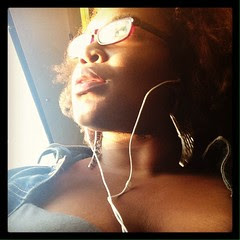 SYDETTE HARRY is a writer, performer, and nerd. She tweets and blogs under the name Blackamazon and performs with The Body Ecology Performance Ensemble in New York. She manages it all with ADHD pride. 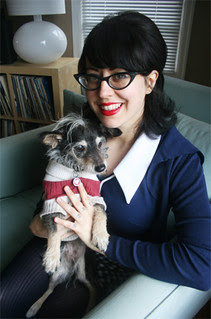 NICOLE GEORGES is an artist, illustrator, and long-time zinester. She has numerous creative projects, including touring twice with the Sister Spit roadshow and creating adorable animal calendars. Her graphic novel memoir Calling Dr. Laura deals with family, queerness, and identity and was published last year. She is currently a Fellow at the Center for Cartoon Studies in Vermont. 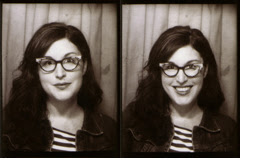 ANDI ZEISLER is a co-founder of Bitch and our current creative and editorial director. She's the author of the book Feminism and Pop Culture and editor of BitchFest: 10 Years of Cultural Criticism from the Pages of Bitch Magazine.  She passes her non-Bitch hours watching television, hanging out with her family, embroidering portraits of dogs, and subscribing to whatever magazines are left on Earth.
Email in your questions right here. Don't be shy—feel free to ask about big issues like race, gender, and sexuality or personal things like dating and family. Your identity will always remain anonymous. Feel free to address your question to a specific columnist or leave it open to any of the three to take it on.

Posted by Ask Nicole at 6:50 PM No comments: