Advice from Mexico, re: Butchinsons Disease 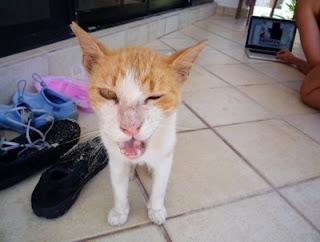 Dear Readers,
I am writing to you from Akumal, Mexico, where I am currently on a writer's retreat with Radar Productions. We are snorkeling and eating avocados and feeding this very tattered Orange Cat (named Orange Cat, hence the capitalization of his name).
I am taking a break from my day of barracuda hunting to answer this very important advice from a woman in need. I got some help on this from Michelle Tea, author of Rose of No Man's Land.
I certainly do appreciate the wisdom of Michelle. You will find her advice right after mine, in italics. It is full of vim and vigor.
LYLASDNQ,
n.g.

My girlfriend’s really social, and we hang out with her friends at least two or three times a week. I get along great with almost all of them, but she's got this one friend I can't stand. I know that this person has good qualities, (for instance, when I asked my girlfriend about them she said she was loyal) but she’s also a chauvinist douchebag.

Sometimes she’s so blatantly stupid and offensive that I can’t stop myself from snapping at her; I think this eggs her on.

I know I’m not alone in finding her incredibly annoying but the general feeling seems to be, “that’s just how she is, she can’t help it”. Short of a mass intervention, nothing’s gonna change.

So she’s an unavoidable fixture in my girlfriend’s circle. Should I skip group gatherings for fear of looking like a bitch? How would you handle it?

p.s.
I dated the lesbro in question (very very briefly!) and ended it because she's such a jerk (and my g.f. does sometimes tell her friend that she's an idiot.)

There are two tactics here:
1. think of yourself in this situation as a separate human.
not your girlfriend's girlfriend.

i would limit the times i am around this person (make an excuse "i'm tired, i have homework, etc") and when i do have to be around them, treat them just as i would if i were somewhere stag and heard them say something fucked up.
Just don't laugh at their jokes and feel free to embarrass them in public or even in private by intervening on behalf of all women when they say something stupid. even, i dare say,
publicly ask the friends why it's okay when they laugh at something misogynist .


2. your boyfriend needs to stick up for you.

if this person says something that is directed at you or personally offensive and your girlfriend knows it, she needs to pony up. why bother hanging out with people who are so invested in their masculinity if they can't even pull out some chivalry when you need them?

Oh, GOD! NOTHING is more tedious and boring than an insecure butch who needs a lot of attention.
Sounds like the douche in question.
There's nothing you can do to give this loser a personality transplant. I'm not impressed by his 'loyalty' — loyalty to what? Is your boyfriend under siege? She seems to have no loyalty to manners, kindness, or common sense.

It's a serious bummer that the rest of the group is being so complacent in the face of this asshole. All you can do is make decisions that prioritize your own comfort, since no one else is going to do it.
Of COURSE you don't have to hang out with hostile people who take a third grader's delight in making you feel bad. Whenever you don't feel up to it, don't join the festivities. If you do partake but find yourself hitting a wall with the bad vibes, split. Give yourself permission to take off the second you feel this jerk getting under your skin.

If people think YOU'RE the bitch, they're shitheads. I know I'm being intense and glib, and that it takes courage to stand up for yourself and feels awful to go against your friend group. But you can do it. You no doubt have your own friend group, hang out with them more. Make friend dates with people in that scene who don't suck. YOU are not the problem here, and if anyone tells you otherwise they need to go to therapy and investigate what bad family dynamics they might be imposing on their friends.

It's good to have standards of what kind of people and what kind of commentary you'll put up with, and I hope the experience of taking this bullshit situation into your own hands feels ultimately empowering, and maybe even wakes the rest of the gang out of their zombie stupor. Good luck, sister! 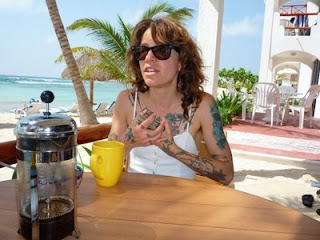 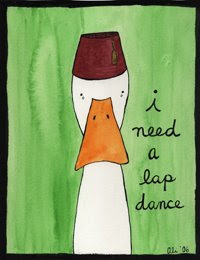 I've been a queer lady for about six years now, and i'm in a pretty solid relationship with an awesome girl. I have no complaints with our sex life, but I was at a show last sunday night; and while i was trying to watch the girl performing i couldn't stop staring at this boy who was standing outside smoking. for the first time in years, i began fantasizing about hooking up with a boy. this boy. I heard him talking to one of the performers outside after the show, and this made me want it even more, but i bit my tongue and went home.
Is it silly that i feel guilty about having these thoughts?
should i tell my girlfriend?

Hi there.
Even the most hardcore of lesbians have moments where they've thought about dudes.
Okay okay, not ALL of them, but a good portion of them have.
Some of them justify their dude-humping wants by saying they identify as fags themselves, and the rest just eat their feelings of straight guilt and never tell a soul.
You fall into the latter category.
HOWEVER,
I think you should not feel guilty.
Also,
Don't tell your girlfriend.
There is nothing worse than having to deal with the hassle of having your girlfriend question whether or not you are straight.
No amount of frottage can free you once you've put it in her head that a straight dude could bend you over (in a non-faggy way) at any time.

The want for straight sex, in most cases, is a passing thing.
When you look at that guy and think about him boning you, the next thought i advise is to think of how you'd feel the next day hanging out with him and a bunch of his straight dude friends.
That should chase you right back into the ocean, where you'll swim for the Isle of Lesbos again without looking back.
Good Luck.

p.s. Confidential to butch lesbian readers: there is nothing more insufferable for a femme lesbian than the butch who endlessly badgers her about being straight. If she was straight, she would have bolted at the first sight of your sports bra clad bosom. I promise she can tell the difference between you and a dude, and unless heavily medicated , has made a solid decision to fuck you, a woman, BECAUSE SHE IS GAY.

my partner and i are at a fork in the road. he's got a serious crush on
someone, and was reluctant to tell me about it, until i accidentally
found out (after they professed their crushes to each other). we've
been having problems, and while he says the crush and our relationship
are independent of each other, i feel they're completely related.

i know he loves me but i feel sad he's just not there when we're
spending time together; i know he's thinking about her. as his best
friend, i want to encourage him to follow his crush and his heart, but
as his partner i feel absolutely crushed by the situation. it's a
classic case of the 'emotional affair' but i suspect that's a
narrow-minded view of relationships. what do you think?

Your boyfriend's job (as your boyfriend) is to be there for you.
Physically and Emotionally. Whether or not he is in a sea of someone else's pussy. This would be true if you guys were monogamous or otherwise.

I wouldn't worry that he has a crush. It happens to the best of us, and comes with the terrain of being human.
What worries me is that this is coming to pass whilst you are having problems.
What worries me the most is that he is secretly sort of pursuing it and egging on the intrigue.


If your boyfriend wants to be with you in a monogamous way, I say he quits this girl cold turkey until such a time when you feel comfortable or he has doused the flames of his desire (this could be months or years depending on the dude).


If you want to open your relationship up, the best time to do that is when you are tight with each other and trusting. And it doesn't feel like right now is that time. If you decide that it's something you want to do, your dude needs to understand that you will be needing his attentions when you're together, not the scraps he has leftover from the La La Land that accompanies a new, uncomplicated crush.

If your boyfriend chooses none of these options, then ball up and bail out. It takes some courage, but is ultimately better than a life lived on scraps.


Duck Portrait by Ali Liebegott
Posted by Ask Nicole at 5:01 PM No comments: