Boiling a frog and other live advice for adults only. 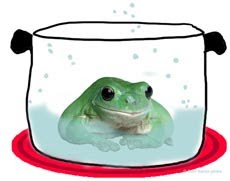 Hello!
First, I must disclose that I'm on the tail end of a cold and a little bit out of it. What better time to drum up some answers? If you find a sentence that makes no sense or looks composed by an infant, please blame it on the fog in my head this chilly November afternoon.

I had a live show with Play/Start and Eighteen Individual Eyes last month,and I wanted to share the advice questions & answers with you.
My next event will be at Mississippi Pizza on Thanksgiving Eve, so show up with your anonymous crabs questions in hand!

What can I say to Bank of America to make them (or an employee) un-close my account?? They're EVIL!!!

I would guess that you did something to merit your account closing. In either case, whether you were in the right or the wrong, just take your money to a credit union or a coffee can under your bed. Who wants to deal with Bank of America anyway?


For my 30th birthday next weekend should I get wasted downtown and do a queer takeover of the Barracuda Club or go apple picking?


You've made it this far without getting gay bashed, so why change all of that by showing up to the mouth of beast on your thirtieth birthday?
I say don't chance it. Go apple picking during the day and go to someplace that naturally accepts you, like a queer dance night, at night. No need to feel tension or hate-vibes on your big day!


I'm a transgendered guy but my wife doesn't know. Should I tell her? If so, how?!

I'm pretty sure this is a fake question. It's 2010, this question was submitted on stage at a gay music night in Portland, Oregon, and you're no Billie Tipton.

But in the case that you are, I say go with it. She probably already knows on some level and is living in a deep state of denial. Don't deny her that. Turn off the lights, warm up the apparatus, and enjoy your time together.

OR MAYBE (a la Clue, I'm going to give you a second ending)

MAYBE you got married as lesbians and now you want to come OUT as a trans dude? In which case, try casually testing the waters by showing her pictures of hot trans guys on Facebook and gauge her reaction.

Try starting a conversation about bi-sexuality and see where it goes.

Like a frog in a pot of boiling water, just turn up the heat a little every day. Try packing one day, binding the next! Wear a moustache to bed or a backwards baseball cap!
Then give her some kava kava to loosen up and tell her that your destiny is to be a guy.
She'll either be in or she won't, but hopefully by the time you spill the beans you'll be prepared for her response.


Lately I've noticed that I find more and more items from places like Sears or JC Penny's to be increasingly cute/ desireable. Is this because design is getting better... or is it because I'm getting older?
signed, M.I. Frumpy


Dear potential Frumpster,
I personally think that fashion is swinging our way right now (the fashion of Gretchen Jones aside). There are cute things happening at Sears and JC Penny! You aren't necessarily a frumpster just yet.
If you want to keep it real, get a punk haircut or a facial tattoo or something. Then now matter if you're wearing an over-sized cowl neck sweater or not, you'll still feel connected to youth culture.

I prefer clear cut bush- what's the most tactful way to ask a dating partner to take it down to the skin?


Eek!
Like I recommended to a previous advice-seeker, I say get your date a little bit tipsy and look at some photos together.
Or start a discussion or a fake anectdote :
"Oh, I heard that so and shaves their crotch completely! It sure seems smooth, and what a way to cool down in the summertime....." something like that.
See what she thinks.

Start slow with some trimming shears, maybe a hair cut, then introduce shaving cream. Say it's a kink! See what she thinks.
But I warn you not to shear an unwilling participant. Better to find an already bald partner than to scar a bush-lover for life.

When you're in a relationship, should you throw out all the sex toys you've used with old girlfriends and get all new ones?

Yes and no.
If you have an apparatus you purchased WITH someone else, like you both gripped it and agreed on girth, pooled your money or bought it as a present for the other, then yes- don't be a cheapskate, just throw it away.

New money will come to you , and it's better than having the ghost of christmas past attached to your phallus.

HOWEVER, perhaps you have one that you bought on your own, string-free, and have used here and there along the way. I think you can keep that one in good faith. (Boil it, duh).

Ultimately, it's up to your new lover.
If they say scrap it, or don't want your par-boiled thing around, just pony up the money for something new.
Light a money candle, spin around three times , and you'll find a way.


What should I name my baby?
Thanks! - Jane Doe


I have a coworker who insists on bringing her pennywhistle to work and playing it! She is so proud of her penny whistle-playing skills , but really it is just annoying to everyone. What can I do to stop the pennywhister without hurting her feelings? Sincerely, not a penny lover

Sorry Radical Honesty yahoos, but this will require a bit of lying.
Just walk in one Monday holding your ear and say you either have an ear infection or blew out your ear drum at a concert over the weekend.

Say that any high pitched noises will cause you a world of pain. The penny whistler will either get the hint, or you'll have a "genuine" medical excuse to politely ask her to can it.
Keep it up for a while and eventually the whistle will stop coming to work at all.

If she resurrects her parlor trick later on, just grab your ear and fall to the floor, blaming it on your bum ear.

What is the best comeback?

This is for someone you've been seeing, or even live with.
If they try to break up with you , just say

I think I've given this advice before in a previous column , but it still stands up.

I need to get rid of the tiny ants in my kitchen. Cayenne & citrus haven't worked!
Sincerely, Ants in my Pants

Put some borax in some honey and leave it out for them. The ants will eat it, grasp their little throats and go "!!!!" then keel over. It worked for a lady I babysat for, it can work for you.


What is a good tattoo idea?


An anchor. Or a realistic picture of a bird.

What should we consider if we want to use her brother's sperm to make a baby inside me? How do we keep him "uncle" and not "Dad" ?


Consider using a lawyer and making it clear that he's not "Dad".


My genitals itch. What's up?

You probably have a yeast infection.

YOU PROBABLY HAVE A YEAST INFECTION!!!
Go to the Doctor ,
OR , if you self diagnose as yeast, skip the garlic-on-a-string and go get some Monistat.
Also, don't ride your bike for a week or two.

When giving a dude a hand job what do I do with the balls?

Do nothing with the balls unless asked.
They're really tricky, and kind of delicate, so err on the side of caution and touch them not!
Or just ask. In a sultry whisper way...


How do I tell my neo-nazi friends that I'm jewish? Do you think they'll still like me?

Fake question. Again, received at a queer music night in Portland, Oregon.
Don't have neo nazi friends is my answer.
Also, don't bring neo nazis to a queer show! Leave us out of your poor friend choices! I don't wanna be gay bashed!

How come "fingernails" are so taboo to discuss casually with lesbians & straights? -Baby Dyke

Because Lesbians use their fingers to have sex.

If your straight friends continue to quiz you on it, tell them to
Try putting a press-on-nail on the tip of a penis and let you know if it's still even a question.

Put cotton balls in the fingertips of a glove (a latex glove, not a dish washing glove, ahem) and THEN you can put your well manicured fingernails into the glove and go to town on your partner's genitals. Hmm!

The more you know.


I think my new boss wants in my pants. I kind of wants in hers. I don't like my job but I kinda like my boss. Thoughts?


Wait until you've put in your 2 weeks notice to ask your boss out for after-work drinks. Doing your boss before then is nothing but trouble.


Some points on grace?

I don't have a lot. BUT , say please and thank you and don't talk about people's friends in public. That's it. Oh, and cross your legs.


CONFIDENTIAL TO SCENESTERS BEHAVING BADLY:
what to do when someone you know behaves irresponsibly and fucks over your friend and then you see them around town and want to tell them that they suck?

ps - and they are friends of people you like?

This is a good time to exhibit some grace!
You could either
A) Be polite to them in public. Not overtly friendly , just polite. Just, "Hi" and a smile or something.
or
B) If you're feeling passionate, approach them online or alone and say "Hey, I really wasn't into this thing I saw happen between you and so and so, and if I act weird to you, it's because I'm trying to be supportive of them. "

Maybe they'll tell you something you don't know about the situation, who knows. Or maybe they'll just understand and you'll have some space and that will be that.

You don't have to be all Mean Girls about it, just be an adult. Let them know how you feel (or just act polite), and move on. Focus more on being a friend to your friend and an enemy to their enemies.