This is the face I made when I read this question:

Dear Nicole,
I am having an ethical crisis: I met this guy and we have amazing chemistry, it makes me dizzy. I don't want to date, I just want a booty call for brutal raunch and for this he seemed perfect. Then I told a friend about it and she told me she knew him and that he raped her. I believe her- it's the kind of "acquaintance rape" scenario that happens all the time- but I still think he's hot. I feel terrible. Is it condoning rape and rape culture to sleep with him?

What about just thinking he's hot?

When I told a different friend about the situation, she said she thinks most guys would bone a sleeping girl. Is that true?!

Signed,
Someone with a Boner for Bad Guys

This question is upsetting! Here's the short of it:

1. Do not reward him for his bad behavior by sleeping with this guy.

2. There are so so many handsome dudes who would love to have brutally raunchy sex with you who are not rapists.  Move on.

4. If I was your friend and I knew you'd continued to bone my rapist, it would make me physically ill.

5. Can you still think he's hot? I'm not going to play Portland Mind-Police here. You can thinking whomever you want is hot. Even if they are the worst person in the world.
Black hearted sociopaths are sometimes handsome and have a dangerous thing going for them.
They, like all feral animals, are for looking but not touching.

In real life, find someone nice and then just pretend they're a BHS from time to time.

P.s. Your friend who said that "most guys" would bone a sleeping girl is TRIP-PING. Ugh! Argh! Blargh! I am rolling around on the ground Argh-ing and hitting my head against the wall right now just thinking of the idea that she even told you that.
What! What planet.... Who.... What!?
Was she born in a garbage can and raised by rats??? No! Not true. Girlfriend needs to splash some water on her face and break free of the scum bags who made her think that.
What is this, Elm Street? 9, 10 Never sleep again, or your might get RAPED? Jesus Christ! 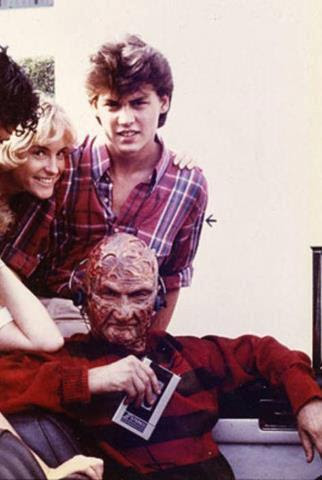 Dating As the Dust Settles 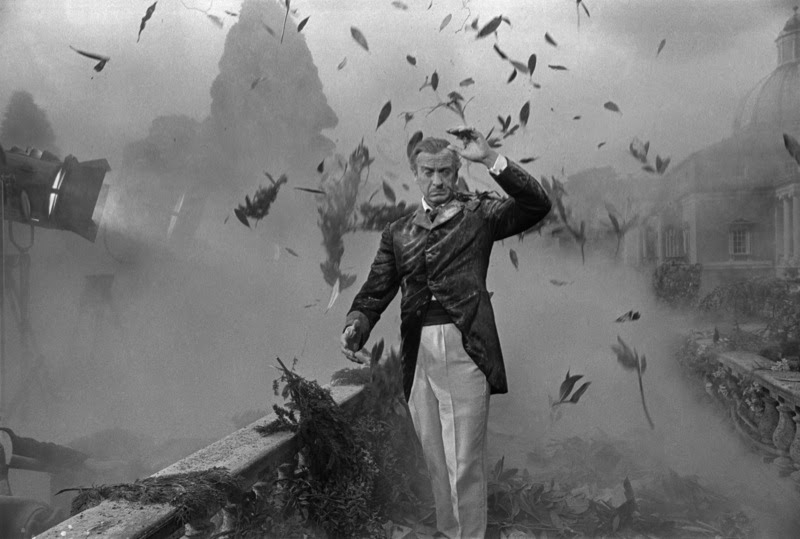 Dear Nicole,
Me and someone have a longtime crush. They just broke up with their partner.
Both of these revelations came at the same time.
How do I stay out of the breakup shrapnel zone so I don't get ripped
up and can have my own dang relationship?

Signed,
Trying to Keep it Cool

Do you want this to become something other than a fling?
If so, I advise you to cool your jets.

Take some physical space for at least 2 weeks (preferable
two MONTHS)  to give your
crush some room to be sad and not fill that feelings-hole with
you.
Then start slow, like actual dating.

A Side Note, Confidential to Lesbians across the U.S.:
"Dating" is a prolonged series of short hangouts intended for you
to suss out if someone is a good romantic fit before you
spend every waking moment together & dive into a
super-bonded faux marriage.
Sometimes *some* people become overwhelmed with their feelings
(or p*ssy) and chain themselves to someone whose
faults they don't even know yet. To those I say,
chill! Date! Date around!

Anyway, back to Cool,
Be strict! Your crush will be lonely and you will be
excited, and it will be tough to say no,
but chew a stick if you have to and wait it out.
If your crush has lasted this long, it can sustain
another couple of weeks/months while the dust is
settling.

Last but not least, think of the feelings of the
person your crush is breaking up with. You need
to respect their space, the relationship they've had
that is falling apart, and give them some time to
have a proper funeral. 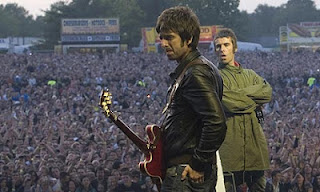 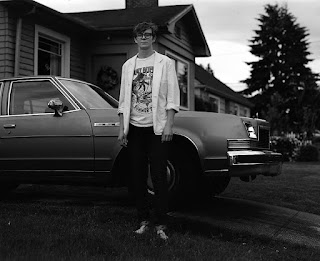 Gossiping and the Poly Perspective

Dear Nicole,
When is something considered gossip? Can there be positive/nice gossip?
-Gilly in Germania

Dear Gilly,
Here's an anticdote that may or may not resonate with you:

Several years ago I was talking to a friend (let's call her Gomer) who'd been hanging out with a new group of partying queers.
Gomer said, "I don't understand why they are friends with each other- all they do is talk behind each others backs".
I hadn't ever heard anyone actually say this out loud before and I thought it was important:
If you choose someone to be your friend, then you are saying you like that person, and you should treat them as such. Which might mean not saying mean or weird things about them behind their backs.

If you are saying nice things behind a friend's back, it's not gossip- it's just talking nice (which is very feminist).

If you are talking about a friend's problems or behavior behind their back and it's not for a specifically helpful purpose  (i.e. you are rallying the troops to have an intervention or getting advice you WILL USE when dealing with a difficulty that's arisen), then you are gossiping.

Now listen- some people are unabashed gossips and they don't care. Hey- if you want to talk bad about everyone you know and cultivate weird vibes, that's your business. Own it!
Don't pretend like you were doing something inherently therapeutic by spreading other people's business. "VENTING" ABOUT YOUR FRIENDS TO OTHER PEOPLE THEY KNOW IS NOT THERAPY. It's gossip.

If you must vent, I think it is okay for you to speak freely about your friends with one intimate partner who can listen to you and keep their nose out of it. If you don't have that, then one friend who (ideally) does not know them is fine.

Because you know what is the worst? When you've been a party to some gossip about a friend and then you see them and you have this film of weirdness over your entire body because you have just been brewing and stewing bad vibes behind their back and now here you are trying to have a kind conversation to their face. No thank you.

Another thing about gossip: If you are traveling or working in close proximity to other people (i.e. You are on tour or in an office together), I recommend you do NOT gossip about them to other people you are traveling/working with!
This is a tour "Do" that I learned along the way- if you need to vent, save it up and do it at a friend's house on a day or night off. It's better then being in cahoots with someone else in the van/office and sullying the good vibes of the team.

Take care, Gilly, and don't you DARE say anything behind my back!

p.s. I admit to being a full-fledged frothing at the mouth gossip sometimes. But not always. I try!

Dear Nicole,
From a poly perspective:  Should I tell my current sexual partners that one of my partners is pregnant with my child?
-Knocking Up in Yonkers

I don't think you  need to tell a sexual partner that your current partner is knocked up unless you are planning to sleep with them more than three times, and/or get into something more significant than a short term bone-sesh. If you find yourself gazing dreamily at them after encounter number two and suspect this may go further than a roll in the hay, I say disclose. You don't want them to pin any hopes on you that you can't fulfill.

Good luck, and tell that baby "Hello" for me.

p.s. I am advising you with the assumption that your pregnant partner knows and is totally kosher with your polyamorous ways.
Posted by Ask Nicole at 4:01 PM No comments:

Groat Techniques for Football Players and You

Dear Nicole,
You once said you made a great raw breakfast dish with groats, tell me how!
Sincerely Groatesque

I eat groats every single morning.
Many people dehydrate their groats. I do not.

Here is what I do:

First, Soak a cup of groats in a bowl of water (covered) overnight. That's 8 hours to you.

Next, rinse the slime (yes, slime) off the groats in a colander.

Keep them in the colander! Put it over a bowl so they can drip their slime into it.

Cover the colander with a lid or a towel, and keep the groats moist for another 4-8 hours,
or until they grow the smallest of tails. This may require you re-rinsing them every 2 hours or so.

DO NOT LET THE TAILS GET TOO LONG. It's not the end of the world if you do,
but if they get long tadpole tails they will start tasting like a sprout, which is a bit strong and earthy for a morning cereal, don't you agree? 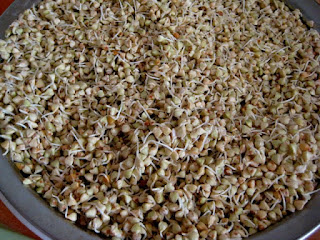 This photo shows groats with tails that are too long. Try for ones that are short. Short little white tails that haven't had the chance to curl yet.

After they have short tails, you can keep them in a tightly sealed Tupperware in the refrigerator for (in my experience) 3-4 days. I keep extra sprouted groats in the freezer and defrost them when I'm ready to eat them.

The groats will have metamorphosed into something different than a grain, they will now spread their wings and become a vegetable.


"When you sprout groats they become a vegetable instead of a grain. That transformation makes them easier to digest."-A commenter whose photo made them look like they knew what they were talking about

I prepare my morning groat-meal (har har) by spooning some groats into a bowl with soy yogurt and fruit. Add sweetener if you must. 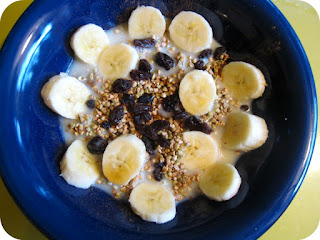 Here is a photo some stranger posted of their groats with fruit and rice milk.

Note: A lot of people dehydrate theirs. I like the texture of a soaked, hydrated groat, so I don't.
If you see a vine coming out of my nose at some point, then perhaps I was wrong.
In the meantime, I'm fine. I think they are tasty, toothsome little bits. Add them to a raw parfait with cashew cream and fruit and die of happiness.


I will be honest: I got most of this advice from a blog called Raw Love .
Posted by Ask Nicole at 3:39 PM 2 comments: