Dear Readers,
Hello there. I write you from the road, as I am currently on a book tour with sts and Katy Davidson. I have asked my tourmates to join me in the advice business. We advised after much whiskey, from a Red Roof Inn in West Lafayette, Indiana.

i love my girlfriend and am fiercely dedicated. however, lately she's been suffering from complications of a lifelong health disorder that is usually no big deal but recently reared its ugly head for the last few weeks and I've been her bedside companion for pretty much the full stretch (evenings, weekends - i do have a busy daytime work life after all!). dude, i am so tired of illness and despair! i want to breathe fresh air and ride my bike and laugh and be excited to be alive! how can i manage to stay devoted to my sick sweetie and get out and be a part of the world without feeling guilty?

sts: Schedule Time for Yourself. Your sweetie will understand b/c she will see the change in your eyes when she’s happy to see you genuinely full of life, and it will hasten her healing process. Occasionally you should throw her in a wheelchair and take her to Gaycation. Just the early hours before it gets too crowded. A half hour tops. Maybe you could take the lift so she can designatedly drive you home. Maybe you could have a shot of whiskey. I also want to affirm that your feelings are healthy and normal and if your girlfriend loves you, she will support you taking a few nights off for yourself.

Katy: that was pretty brilliant. So quick. I agree.

I had always considered myself "bisexual" (ugh, why is that such a bad word.), but like many a queer girl (j/k) found myself practically married to a bio-dude for several years (like 4). Eventually bio-dude really wanted to tie the knot and I was like WHOA I LIKE GIRLS TOO AND I CAN'T BE WITH YOU FOREVER and since having THE WORST BREAKUP EVER, have only dated women. A couple of months ago, I met a really nice BIO-DUDE. We hung out a few times and he turned out to be really cool, nice and handsome. On our first "date", he told me he was basically seeing someone in a faraway country and had plans to move there in a few months to be with her for a few months which made me think it wasn't really a date. But on our second "date" one of the first things he told me was that his long distance girlfriend and him were in an open relationship. Then he spent the night at my place but nothing happened. On our third date, we spent the entire night making out while listening to records. BUT DIDN'T HAVE SEX. There was also alcohol involved and he has since decided to try and be sober for awhile.

Now he still lives in small-town Olympia, while I have moved to slightly larger Portland and I don't plan on returning. Only problem is that due to some prior work commitments, I return to Olympia once a week and spend the night with him even though we haven't known each other that long and I could stay with about a million other people I am technically better friends with--he has insisted I stay with him even going so far as to GIVE ME A KEY (!). But we sleep in the same bed and it's nice and intimate cuddly style BUT WE HAVE NEVER MADE OUT AGAIN. What the F, Nicole?! Did I set sail on the friend-boat or has he had a change of heart due to the fact that oh you know HE'S MOVING TO BE WITH SOME OTHER GIRL or did making out with me drive him to sober up and take off those beer goggles (OK, that's just my low self esteem talking)? I just want to fool around knowing I won't be in Olympia much longer and he won't be in the U.S. for too much longer. But I don't know how to bring it up without alcohol frankly. Do I need to get him drunk on Kombucha? Do I need to stay away from boys? I don't want to give him back his key because its fun to cuddle, but sadly I would like more.

Sts: move along is what I say. Turn the page. Nothing else to say.

Katy: I’m kind of shaking my head at the whole thing. Also, I completely zoned out for a third of that. He’s leaving. Just let him leave.

Sts: don’t cuddle him. What’s the use?

Katy: You can put that I agree.

Nicole: Yeah. Me too.

Sts: they were created simultaneously.

Katy: I’ve got a few years to go

When I first moved to Portland in the early 2000s, nearly everyone I met was vegan or vegetarian, which was great because I am a longtime vegetarian hailing from a not-so-veggie-friendly southern town. As time has worn on, nearly all of those people have gone carnivorous. This depresses me. It makes me feel like some of my friends were never actually doing it for moral or ethical reasons, rather just because it was the cool thing at the time. It makes me wonder what other elements of their moral/ethical fiber are so easily changeable. These days, I meet so few vegetarians that when I do, it is a major bonding point. Then when these people almost inevitably hop on the beef train, I feel somewhat betrayed. I generally try to play it cool, but lately its really getting to me. Is there anything I can say to make my friends think twice about taking the plunge into Baconville? I don't want to lose their friendships over it, but its hard to just stand by and watch all these former vegans wolfing down bacon cheeseburgers like there's no tomorrow. What's your take on this situation?


Sts: Is there anything that anyone could’ve said to you to keep you from eating meat?

Katy: I don’t know. If they handed me the vegan brochure again...

Sts: I don’t think there’s anything you can do to stop ppl from eatin meat and sometime you have to grow up and mature and realize it’s a personal choice not a political choice from people eventually.

Katy: WISE! Wise! You’re so good at this!


Dear Nicole,
My partner and I have been together for over a year, are living together and definitely in it for the long haul. This is my first long term and frankly "real" relationship I've had. We've forced each other to stop our promiscuous tendencies and bitchy games (mostly) because we're oh so gosh in love.

This is all great, but after the puppy love has faded and you know all those dumb stories about each other, what now? Neither of us are going anywhere and we both know that and I think that's kind of made us both lazy.

Still, I want to know even more about them, I want this to keep going and keep learning together. Are there things I could actively do to give our pairing a boost?


sts : read my zine, So You Think You Can Three Way.
Role play that you’re each other’s parents, and... what would they do?
I say, don’t look to your partner for entertainment. When you look outside your relationship for entertainment value , you find that your partner is a nice place of respite from the world.

Sts: never look to your partner for your main source of entertainment, you will always be disappointed.

Katy: dude. I am SO vibing you right now.
She is so tapped in. Just on it.
There’s a central theme to all you have to say. Which I think it exciting. BE YOURSELF. I’m being completely serious. Dude.


I’m summarizing sts’s advice for any question at all :
Be yourself. Don’t forget who you are.
Things will stay exciting with your person if you have any chemistry at all.
IF you stay true to yourself. And don’t get completely lost in someone else.
Which is admittedly fucking easy to do.

Sts: the flip side of that is that ppl who’ve made the commitment to live with each other have to ACTIVELY seek hot situations b/c they won’t present themselves by living with each other.

You have to actively search.
And actively create. 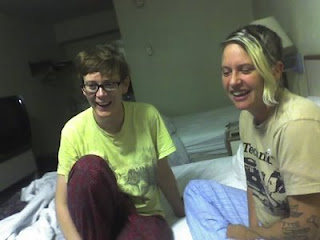 Please do a million advice columns on tour so I can read you all responding to letters like this as much as possible. I love it.

I found an old sts zine when I moved recently! She is so wise, it is true!