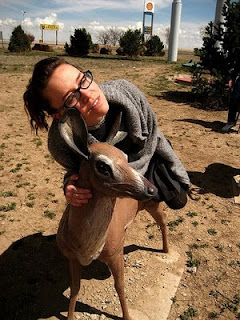 Deer Friends,
How lucky are we to have another guest columnist?!? Today I have imported a few select answers from San Francisco's best advice-giver and queer author, Michelle Tea.

i've been with my partner for over ten years. we have a good time and
love each other and rarely fight but we're not without our share of
problems. namely we're complete opposites. this is true of almost
everything.. i'm a homebody type, and he's more outgoing; when i want to
stay out, he wants to go home and sleep; when he wants to stay up, i'm
tired. this goes on and on.

we question if this is a healthy relationship and if we can really offer
each other what we need. we've always said we'd be friends even if this
doesn't work out, and strangely i wonder what it'd be like for him to be
with someone who's more in tune with him.

to complicate things i have a serious crush on someone else and often
find myself thinking about said crush. but i don't want to get carried
away thinking life would be perfect with my crush. after all, i do have
a very real relationship of ten years with someone whom i consider my
best friend but unfortunately maybe i know too well.

i think what this comes back to is the idea that my partner and i each
need to change some things about our relationship and about ourselves
(whether it's by leaving the situation we're in by breaking up, or how
we're communicating about our needs and differences). the question is,
should we attempt to continue this together, or move on? is it really
possible to grow with someone who knows you so well (or thinks they know
you so well)?

lost in emotion,
happy but sad

Hmmmm. The Buddhist idea that the suffering of life comes from
resisting change is illustrated by my favorite faggoty Buddhist teacher
with an anecdote of a person who has worked their ass off all day,
outside, in the heat, like, clearing trees or cleaning a rich person's
swimming pool, and then takes a cold shower, and the cold shower feels
soooooo good, like it is the million dollar solid-gold cold shower of
life. Best shower ever. The person thinks, "Oh man, this shower is
making me feel so freaking awesome I'm going to stay in it forever!"
But of course the cold shower soon begins to feel uncomfortable, then
miserable, and the person is all pruny and blue-lipped and shivering,
wondering why they ever thought the stupid shower felt good at all. So,
maybe your relationship is a shower that felt really good when you
needed it to back in the day, but now you want a different sort of
shower, one that is a homebody and looks like that person you have a
crush on. Break up!

But you should be warned: you will be totally fucked up from the ten
years you spent with your current love. People grow around each other
in ways that are heartbreakingly imperceptible, and when you wrench
yourself apart from each other it feels alienating and bizarre and
super painful. Even if you believe you're doing the right thing. Long
term relationships warp you. All my friends who escaped their=2
0LTRs
report a frequent sensation of being haunted by the original
partnership. This sensation of being haunted can take the form of
bursting into tears, years later, on public transit, though more
generally it manifests as a hard to shake ennui, a sense of having
selected the wrong path at some long-ago fork in the road, a path
you're now stuck on.

Here is advice for everyone coasting along blissfully in two or
three-year relationships: Get out now! You think it's going to last
forever, but it's not, and by the time you realize this a decade will
have passed and you will have done irreparable damage to your heart and
mind!


Okay back to you, Happy But Sad: Get ready to date a lot of hot morons
who just don't GET you the way your ten year person got you. If you are
lucky you will get so strung out on the powerful sensory experience of
sex with a totally new person that you won't realize how moronic they
are for quite some time. When you do figure it out you can scoot away
fast with nary a consequence, explaining to everyone, 'It was a
rebound.' Everyone will nod sympathetically. Then you'll do it a few
more times and the rebound excuse will become unavailable to you. Now
you are simply single and doing what single people do — hooking up with
losers, trying to find that special person you can hunker down with for
ten years and experience something meaningful. Except, y
ou already did
that! And found it dull! So, I guess all that will be left for you in
light of this is cheap sex without the illusion of love and long-term
romance. Go slut it up!

Also, get ready to watch your ex date people that totally baffle and
gross you out. You will be like, 'Oh my god I can't even believe you
are going out with that person who everyone in the world knows is
totally nuts and now everyone thinks that you are nuts too and I must
have been nuts to have ever gone out with you if this is the caliber of
people you enjoy dating oh my god does this mean I am the same caliber
of person as this nutso new date of yours oh no!!!!!!' and you will
have a existential crisis. A friend of mine who is a completely hot fox
and also the most brilliant genius writer who has ever written a book
once said to me, as I suffered through one of these existential crisis,
'I've never been left for anyone who was anywhere near as great as I
am.' I don't know why people who get out of LTRs rush to mate with the
individual who is like the anti-matter version of the person they just
were with, but they do, and you will, and so will your ex, and everyone
will be mystified and grossed-out by it.

Listen, if the world of single people proves to be as unappetizing and
strange as I suspect it is, you can always get back together. And if
you do, you'll appreciate each other SO much more, you will clutch each
other gratefully, marveling at all the bullets of untold misery you
dodged by coming to your senses and reconciling. And hopefully you will
have each had some crazy sex with someone/s younger and drunker than
the other, and, thusly reminded of the power of an awakened libido,
will get right to work not taking each other's junk for granted ever
again. And then you live happily ever after, til the next time one or
both of you starts moping wistfully down the 'Is that all there is?'
path, and start the process anew.


Dear Michelle,
how do I tell my friend that drinks a lot that she repeats herself too much and that her breath smells like old bologna? She is a close talker and I have tried passive gumming.
-Big League Chew

According to Alcoholics Anonymous, the best time for an intervention is
when the boozer is hungover, feeling like a roll of rotting head cheese
tossed in a New York City gutter in August. If your little drunk friend
was out boring everyone to tears Saturday night, show up at her house
bright and early Sunday morning. Bring something nice to soothe a
dehydrated hangover — pineapple juice is good. Under the guise of
reminiscing about how CRAZY last night was, deliver a monologue that
goes something like this: 'And, dude, you totally told that same story
about how you fell down the stairs at your job like seven hundred times
last night! Again and again! Like, to all the same people! Do you
remember that? And you were standing so close to everyone, like all up
in their face, no one could get away from you! It was so crazy! You
smelled like Bologna, too! You know, you kind of always smell like
Bologna when you drink, what's up with that? Are you drinking bologna
liqueur? You're so crazy!'

When I used to drink too much then snort tons of cocaine and make
people hate me by telling everyone who never cared how good Marilyn
Manson's Mechanical Animals show at the Cow Palace in 1998 was, again
and again, I sort of knew I was doing it. I felt just enough shame
that, if anyone had called me on it I would have collapsed inside,
totally mortified. If they had then told me I smelled like lu
nchmeat
and had no concept of personal space, I would have been devastated. Of
course, I would have kept doing it, all of it, because I am an actual
alcoholic and therefore have no control over my behavior when drunk,
but maybe your friend is not an actual alcoholic, only swiftly on the
way to becoming one. Perhaps your intervention will be just the thing
to save her from further ruin. It's worth a shot! Just make sure that
you don't start feeling bad for her when the shame spiral sets in and
get all, 'Oh, it's no big deal, you shouldn't feel bad, don't worry,
here, have some Bologna Schnapps.' The shame spiral is crucial. If you
see her starting to drown in self-hate, give her a little kick.
Something simple like, 'Yeah, everyone was talking about it' should do
the trick. You're a good friend! No, I mean it! You're a good friend.


Nicole Adds A Bonus Answer from Henrietta of the Old Folk's Home:
Say
"I ain't tryin' to be rude, but can i help you? As a friend?" and hold up a peppermint
(this move was demonstrated to me when i asked her for advice. She holds up the peppermint exactly after saying "can i help you?", and then the part
"as a friend" is supposed to soften the blow of seeing the mint, i think.)

michelle is a genius!

I love all of this. Especially Michelle's post-LTR crystal ball.
So true it hurts.

What if the crush is the cold shower? Just a thought.