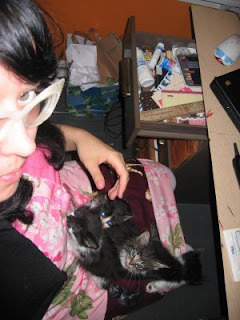 Hello, Readers! It is September and I write to you from my my borrowed Herman Miller Aeron chair, listening to the snoring sounds that young Wishbone Georges makes from her bed.
1. Get ready for "Ask Nicole Georges: The Tour" this fall/winter. I'll be traveling around the east coast with sts and Katy Davidson, giving live advice everywhere I land.
2. Note: Picture at left is meant to clear my good name of Cat Hating rumors. Look, i like them so much i have , like, twelve on my lap at once!
3. Comments are encouraged and accepted.

Should I tell my ex gf I broke into her email account in a fit of crazy to see if she found someone new?

If you need to stalk your ex girlfriend, do it through Myspace like any decent person would do.
In the meantime,
do NOT tell her that you broke into her email account! Swallow that secret and clear her password from your mind.

I have always enjoyed the company of animals and grew up around many different types of pets. For the most part, I was raised around cats and when I moved to my own place, I started with having only 2 cats, then I got a dog and became a total dog lover. The cats crack me up with their antics and craziness, and my dog is my best pal and I take him everywhere with me.
Cats can be just as affectionate as dogs.
I know you are an awesome person who cares for all animals. My question to you is, do you think you will ever adopt a cat? What is is about cats in particular that you don't dig?

Sigh. I have been plagued with anti-cat stigma ever since i drew a comic that said "As a general rule, i don't like cats." when i was 22.
Well. Let's clear this up.
When i was 23 i hit a cat whilst driving the minivan for an animal rescue organization i worked for. Please take my word for it that there was nothing I could have done to prevent this Grandpa-Cat murder/suicide.
So riddled with guilt was i, that i declared then and there that i would repair my relationship with the feline community. I have a good four years of pro-cat petting under my belt now and would like to say i'm reformed.

I even rescued a litter of kittens (See Above Photo) and drove myself to the brink of insanity after realizing i would have to rear them and find them homes after no rescues would take them (keep in mind i had four dogs and three chickens at the same time).

I actually tried to adopt a cat ,Cleo Clementine Cashew Cardamom Cupcake Georges, last year after Lambchop died. I rescued her from a family off of craigslist who'd moved and left her sitting outside of their abandoned house. I put Cleo in the back of the my borrowed Mercedes Benz and took her home. Well. I'm allergic to cats. I thought after years of dating cat people I'd cured myself, but apparently one dandery cat in one small house in winter with all the windows closed was not the ticket for my sinuses. And so, she is now Cleo Clementine Cashew Cardamom Cupcake Kilcoyne, as I gave her to a friend. They are very tight and it all worked out okay (see photographic evidence, below). 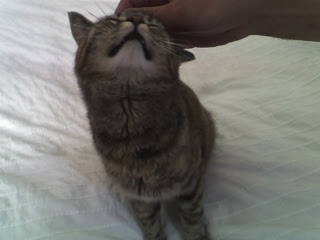 So the answer is: I would be roommates with a cat, or a step parent to a cat, but i would probably not get my own cat. Power to cats. Power to cat people! Hand me a kleenex!

Dear Nicole,
I haven't dated women much.. whats the etiquette on recycling sex toys with other, uh, dates.. presuming I will actually find another?

Nobody wants to fuck the crypt keeper, so get rid of the spider webs and bring in the sunshine and I'll bet through this manifestation of bedroom vibes that you will , in fact, lay again.

I'll get right to the point: How do I deal with my lame-ass friends? Don't get me wrong, I love them, but they just do nothing. Ever. At all. Any event or party that ever happens only happens because I plan it, and most of the time when I'm trying to organize something fun they all just punk out. This leaves me lonely and bored in my room eating cookie dough every weekend.
I just got out of a relationship and the last thing I need is to sit on my ass and think about how it all went downhill. I've tried making new, better friends, but so far this has been unsuccessful. Any tips or ideas? Also, if I didn't want to wait around for them to have a good time, is there any way one can dance alone on the dance floor alone without looking like an idiot? THANKS.
-No More Dull Nights (In Minneapolis)

Hmmm.
My questions for you would be:
How did you make these lame ass friends in the first place?
and
Were you in Love Jail whilst in your previous relationship? And if so, were your friends perhaps put off by this or did they feel ditched and so now they are vengefully ditching?

Either way, it's time to make some new friends and put the cookie dough away.
In Fact,
Cook the cookie dough instead of eating it, and wrap it in little packages and take it to the houses of your lame friends in order to butter them up into hanging out with you while you seek out new, cooler friends.

To meet new people:
Organize a sewing circle at your house.
Get involved in some Minneapolis happenings. There's go to be something going on there. It's where Prince is from, for goodness sakes!

By all means, go to dance nights by yourself. You don't have to dance by yourself, though, dance with a stranger!

Go see movies by yourself.
Get a dog.
and
See my previous post about friend-finding for someone who'd just moved to Minneapolis.
Good Luck!


Dear Nicole,
In your personal opinion do you think befriending someone that is hot on Myspace is appropriate? Like, if you don't know them.. but want to..?

Yes it is totally acceptable to befriend someone via Myspace based only on the fact that you think they're hot. Even if you don't know them.
I've done it before , I'll do it again, and I encourage you to do the same.

What you say to reel them in and make them accept your request, however, is the tricky part.
Like, when they say "Who are you? Do I know you?".

I can't tell you my personal strategy because it would spoil it for myself and future myspacings, but think of something that doesn't sound too creepy, or maybe leech onto the fact that you have a mutual friend. "Oh, i saw you were friends with so-and-so and they're like, my favorite person ever and i thought we'd get along....".

Oh. I have to mention a bit of internet sense. Think of the most annoying person you know. Now think: That person could make themselves sound good on the internet. Just something to keep in mind if you're cruising around for dates.

Dear Smartest Girl in the World,
I have been allergic to cats since I was around 10 years old and almost died, and on at least one other occasion when my moms pack tried to steal my breath away a couple of years ago, But my allergies have mysteriously vanished this year. I have no idea how or why. My theory is kombutcha. I did sleep with a cat last night and had an allergic bump on my arm, but no clogged breathing or other such delemas that have plagued me in the past. Good luck and congratulations on the advice road show.

Oh yeah this isn't Hannah just her computer, so a comment back to her would be confusing. Cheers, Lance

GO ON A TOUR THROUGHT THE MIDWEST. That is my request, advicer.

Minneapolis is a blast and a half, once you get out in it. I moved here 3 years ago (from NJ) and it is one of the most fun cities, if not the most fun, I've ever been in.

Getting a dog, like Nicole says, is a big one; it will help you meet people (including kids and their parents, who are always fun to meet).

As far as dancing alone goes, my thinking is that all dancing looks foolish until you stop caring that you look foolish. Then you look cool (because you are). Too Much Love at First Ave is a pretty cool, fun, free (with college ID) or cheap one.